Shooting Star : An explosive blast of celestial energy that is focused on the target.(x2 preparations)


Little Angel : A magical invoking of lightning on a focused target.(x1 preparation)


Straight Shooter : Also referred to as the “Quick Kill”, Straight Shooter is when he fires a quick-draw beam of celestial energy to put down arrogant opponents. It’s rare to see this.(quickdraw)


Electric Land : Invoked by magic, the field is struck repeatedly by lightning.(x2 preparations)


Burnin’ Sky : An onslaught of energy blasts that descends from above.(x1 preparation)


Rock Steady : A forceful hammering of his presence against the area either through oscillation of his aura or the emanations of inner prowess.(quickdraw)


Rough Diamonds : The technique in which he crafted after seeing Corban Saezer use his unique skill called “Million Carat” in a skirmish with him. Made entirely to honor him, it is a psychokinetic manufacturing of bonded carbon that is unleashed in a barrage of shooting diamonds.(quickdraw)


Shadow Step : A dark form of teleportation; the process of moving through empty-space seamlessly and without the constriction of tangibility.(quickdraw)


Shadow Waltz : The dance of death. A repeated use of Shadow Stepping often occurring with melee tactic.(x1 preparation)


Crimson Lancer : Energy channeled from the cursed depths of himself, he can shape and solidify energy of a negative karmic value.(quickdraw)


Ivory Lancer : Channeling positive karmic energy, he can shape and project a lance of celestial energy.(quickdraw)


Falling Star : A literal summoning of a star smashed into the area.(x3 preparations)


Xetaken-R: A monomolecular sword crafted in the image of a katana, though most X.E.T.A’s modify their Xetaken. This is the equivalent to a soldier and their gun. It is often handled so much the weapon becomes an extension of themselves.

Blade Set: Different shaped blades hidden on his person, the count has never been determined and some of them are known to be as sharp as his Xetaken.

X.E.T.A Tactical Gear: From his head to his feet, he is decked out in gear made for his kind. This is how he originally looks. Everything he wears is substantially equipped for battle, from the flex-fit mobility to the technologically advanced threaded durability.

Psychomask: A faceless white mask with two holes for eyes.

Ruinhart: A long sword having yet to be seen.

Angel Slayer: His primary weapon, the blade of Da’ath; Slayer of Angels. This weapon was crafted to slay celestials and was prophesied to be wielded by Raikenzu to create terrible destruction in the Multiverse. Choosing his own path, he denied the overlord of the void, and reined control over the deathly blade. It often looks like a katana or rapier, though it’s shape can vary.


Hyper-X.E.T.A: Also known as metabody synchronization, aligning the mind, senses, and body causes the X.E.T.A to reach the pinnacle of their material form. This is considered a transformation while retaining the prior preparations. Aesthetic effects can be detailed like multi-tiered aurorae, lifted hair, and rolling energy, but are not necessary. Mind power, awareness, and bodily ability are tripled.

Adamancy: Another synchronization of the metabodies, this time adding the spirit/soul to the equation causing a transformation on the cosmic scale.

Psychomasker: Wearing the Psychomask causes the curse he harbors to become fiercely active, consuming his reasoning and causing his thought process to indulge in instinctual murder. This transformation is more of an indulgence into a suppressed part of himself that pulls from his unstable creation and the insanity that came with it. He is known to use Angel Slayer while enacting this method, but a deeper involvement into the Psychomask's origins can cause the Griever to appear.


Griever: The mantle of the Harlequin Coven originating from Meme herself. He lived through two lives of this legacy, first one of a soldier, the second of their king. Since an age ago he has carried the curse of having a day-dead-old corpse to inhabit; his vessel suspended in the agelessness of the macabre to be preserved in death. When he was taken by his to be Mistress named Key, he was enslaved to the perverse and efficient ways of those deemed unholy. Key was a chosen of Meme, the mother of this vile yet beautiful gift, and through Key he gained a fond recognition of the originator that let him part without conflict. Through trials he has come to segregate his karmic values, in which allows him to harness this evil side of himself under a strict containment. If left unrestrained, the Griever can embody itself and take complete control over his lesser existence. It depicts it’s embodiment as a gleaming figure in the colors of fire with black eyes and a jagged hollow maw. There is a ritual that coincides with the Griever embodiment. The Psychomask and Ruinhart must be present in order for the embodiment to be complete.

Voidmancer: Commander of the three shades; darkness, emptiness and nothingness. The knight of the abyss and Da’ath, the Voidmancer embodiment is the void personified. Only Raikenzu and his father Ein Graves are known to become the Voidmancer. Angel Slayer equipped to either when the embodiment is active causes a perfected form, allowing them to harness greater power and ability known as Voidmancy. Raikenzu is able, most of the time, to control the immense change, yet is known to lose control on occasion when certain people or elements are involved. The only reason he can become the embodiment is because he is the offspring of Ein Graves, revealing it is an inherited ability passed on from father to son.

Archetype: The self attained form fueled by a nexus-core. A planar singularity where all forms are merged into one point creating a celestial event. Divinity in the shape of knightly combatant, ivory and golden adorned embodiment known as the Archetype hails great change or destruction when he is present. Raikenzu is able to call on the full power of his nexus-core(his soul transcended) at a moment’s notice, but refrains from doing so unless an occurrence of great importance is at hand. His Xetaken is often imbued with the power of his “supersoul” when he embodies the Archetype, transforming it into the heavenly sword Aetheredge. While remaining consciously aware of his actions during this state, divine protocol is more than likely followed in order to minimize needless destruction and casualties if such power is awakened and maximized versus a threat.


When it comes to Skills either you have them, or you don’t. These are the things Raikenzu has come to learn, some of which are as reflexive as a fish swimming.

Energy Manipulation: When a mind that requires efficiency and resourcefulness comprehends the transference and placement of energy, it unlocks the understanding of utilizing the correct applications. This was how his usage of magic, either improvised or studied, came to be, as well as other forces that required the same knowledge. While he is self-taught and very effective in the way he arranges his equations and or channels, he acts on a very primal and basic level.

Hyper-Regeneration: His regenerative ability is horrifyingly quick compared to that of a normal human. Severed limbs can be reapplied, wounds heal in seconds -- though sometimes he forgets to enable restoration.

Outer-Body-Awareness: To feel beyond one’s self as either being part of a whole or having projected sense. Can be referred to as a metaphysical sonar with a three-hundred-and-sixty degree coverage.

Planar and Dimensional Comprehension: He understands how Dimensions and Planes work.


Planes of Existence: Sometimes referred to as the PoE’s, the planes of existence, or planes of manifestation are the basic and fundamental planes in which we think of when we even hear the term. Physical, Astral, Mental, Spiritual and Celestial make up the entire composition, labeled from “lesser” to “higher” in sequence. Not just I use this system, but from what I’ve seen in this community and most of the others, I seem to be the forerunner. If you have any questions about the planes of existence, feel free to ask.

Relation: It’s hard to imagine relating things as a system, but believe it or not, this has to be listed so those who I may write with know that even if they are different, I am trying to understand. Relation can be useful in scaling or comprehending.

Logic and Reasoning: Another one that is hard to imagine. Sometimes imagination still has to be constricted by logic and reasoning so that everyone can have a good time, per say.

Non-bodied Theory: A philosopher’s theory that even empty-space held a constituent to existence. If not for it, everything would be a tangible ball of mass.

Fantastical Terms and Scientific Fictions: We all create things, and thus, when either reading my writing, or even writing with me and reading, you may come across terms and information that may need more clarifying. If you feel the need to understand something not quite fully explained, feel free to ask.


• James for making this layout and being a bro.
• John for being there for me and being a forerunner for the X.E.T.A.
• Jay for creating the Dark-X.E.T.A. and sticking around.
• Kaelos/Bai for always opening the room or trying to keep the one we have open.
• Melissa for making the forum and doing art for us.
• Everyone else for supporting us and making time on here enjoyable.


--Not everything was listed(over a decade of history, X.E.T.A information, other techniques), I put what I felt like up here, because I think it's pretty silly to give up everything all at once.

--I am not here to impress anyone. Fuck you.

--I role play using creative writing. While I see most others exercise some pseudo mix of persuasive, narrative and descriptive writing, I prefer to do what I want, and that's the creative aspect.

--I do not give a fuck, but I can be reasonable.

--If you think you’re bad, we can see just how bad you are. I usually exercise T1-MP to give people a chance. We can step into a T1-PC match if you really want to get down, and I'll probably embarrass you in front of whoever's watching.

--I am PM Friendly, though I respond to hostility with even more hostility. Then a whole lot more hostility, because you probably caught me while I was drinking or in an ill ass mood. 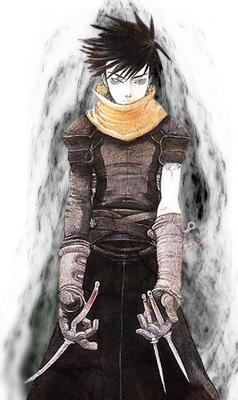 Weapon: There's so many..

Traits: Precise and businesslike during battle